The exotic allure and fascination with the Far East have inspired fashion designers throughout the 20th Century. American couturier Valentina, who loved the clean lines of Asian design, was mad about the conical hats often referred to as coolie hats. Originating in Southeastern Asia, the simplistic style of the conical hat was primarily used as protection from the elements. This style hat is most often associated with beach wear, but it is also a chic look paired with a tailored dress or suit.


The traditional "coolie" hat was made of straw or bamboo; however sumptuous silks, luxurious velvet, brocades, and other fabrics have been used by fashion designers and milliners throughout the decades. Often these peaked, conical hats were left without adornment, but trimmings such as bows, beading, flowers, tassels, feathers, and embroidery were also used.


Gene Marshall is a vision of fashionable allure in an Asian-inspired ensemble from the costume vault at Monolithic Studios. The jacket from Integrity's "Cherry Smash" (with added button detailing) is paired with a black skirt and red gloves, both from Robert Tonner. The delightful conical hat of black and white dotted silk faille trimmed with a contrast black binding and chin-strap completes the ensemble. The peaked shallow crown is topped with a circle of red ruched satin from the original "Cherry Smash" bandeau style hat. Jewels are from Ashton Drake. White Orchid Gene Marshall is from Mel Odom and JamieShow.

You can easily make your own Asian-Inspired "Coolie" Hat for Miss Marshall & Company just in time for Spring. Click HERE for instructions.
Posted by The Couture Touch at 3:55 PM 2 comments:

Zoe is a sophisticated 3-piece suit ensemble designed by Sandra Stillwell for her 2015 Bellissima, Italian Style! event. The impeccably cut and intricately detailed suit is made of black and silver metallic checked silk. A dramatic black felt platter hat trimmed in black velveteen, gloves, and marvelous black and silver shoes (not shown) were included. Blue Belle Gene Marshall, enhanced with an Integrity articulated body, is from Ashton Drake. 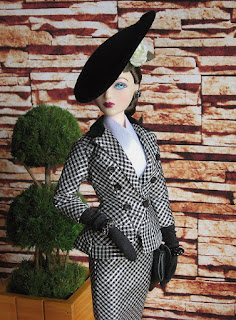 Posted by The Couture Touch at 8:00 AM 2 comments: 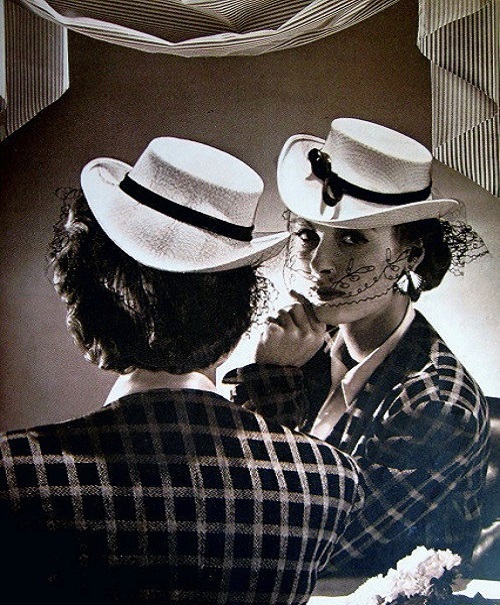